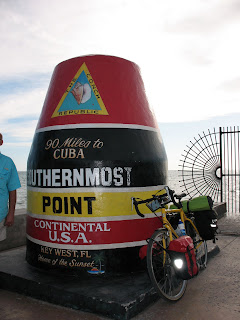 A Great Winter Ride:
The Key West Loop
January 2008
(Published in Spokes, March 2008)
Each winter I get the blues as I put on warmer clothes to keep cycling. However, I do have my limits and will not get on my bike if I look like the Pillsbury Doughboy on two wheels. So when I left my Falls Church home in January and headed south I was not dressed warn enough for our winter weather but overdressed for my destination. I was cycling to Key West where the temperatures are much warmer. Since I planned to be away for only 2 weeks I wasn’t actually cycling all the way to Key West but rather to the Amtrak train station in Alexandria.

I like train travel and find it especially bike/biker friendly. For $10, Amtrak provides a large bike box that only requires turning the handlebars and removing the pedals. In addition, Amtrak charges a $5 bike handling fee. At your destination, the stations will keep your bike box for the return trip and you will only be charged another $5 handling fee. On several occasions, the stations have given me free bike boxes that were left by other cyclists at the end of their journey. Compared to the airlines, which require more disassembly and an $80 one way fee, this is easy and inexpensive. I carry my panniers onto the coach and store them above my seat. I usually pack a dinner and snack for breakfast for the 15 hour trip. While air travel is quicker, I enjoy the time to relax and find that Amtrak coach travel is usually very sociable.

After spending several days with my mother in central Florida, I met my cycling buddy in Sebring, were we started our journey to Key West. After assembling our bikes at the train station we were already hot and sweaty but only had a short ride to our first night’s lodging—the first of several cheap motels. It felt strange trying to cool off in January but we set the motel’s air conditioner on “artic blast” as we tried to adjust to the high 70 degree temperatures.

Early the next morning we stared our 60 mile cycling journey to Labelle, our next destination. We left Sebring on Route 17 which provide a low traffic route through citrus orchards. As the heat climbed into the low 80s we found that fresh picked oranges were truly a cyclist’s gift from God. Route 17 took us to the small town of Lake Placid (Florida, not the one in New York state). There the route disappeared. After some consultations and misdirection we ended up cycling down US 27, a four-lane highway but with wide shoulders and not an unreasonable amount of traffic. However, we did not find any food or water stops along this highway. By the time we reached the Route 29 turnoff that would take us the last 15 miles to Labelle we were whipped. While the cycling was flat, it was hot, we had loaded bicycles, and we averaged 14-16 mph. We were able to refill our water bottles at a forest service facility and rested along stream where we watched the alligators watch us. In Labelle we stayed at another cheap motel but refreshed ourselves with excellent food and cold beer. 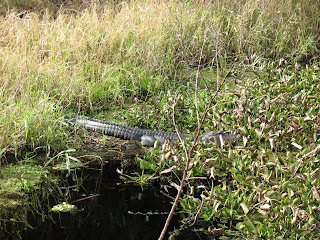 Our second day of cycling was even warmer as we headed to Ft. Myers Beach. We followed Adventure Cycling Association’s Florida Connector route that, for the most part, kept us out of traffic by using rural roads, bike trails, and some urban sidewalks. After cycling nearly 60 miles we found another cheap motel near where the Key West ferry docked. There we met the third member of our group who gave up sleeping in a Sanibel Island resort to stay with us (makes you wonder about cyclist’s judgment). Surprisingly, during our journey we found that motels were generally cheaper than staying in campgrounds. That evening we had another great meal and even more cold beer. Since we were not cycling the next day, my cycling companions decided to party the night away…not me, I crashed early.

The ferry only took 3.5 hours to get to Key West but the transformation was light years in the making as we disembarked into a tropical paradise. We quickly gave up the thought of looking for our camp ground and had lunch at a dockside restaurant. We planned to stay at the nearest campground which was 6 miles from all the downtown activity. However, the more we enjoyed being in the heart of Key West the less we wanted to cycle out of the downtown area. Eventually, we sacrificed our campground deposit and spent even more money for a great hotel at the other end of Duval Street. Duval Street is where most of the Key West’s action occurs. It has 100s of restaurants, bars, and shops to keep you entertained all day and all night long. Many places have live bands and singers and the entertainment never seem to stop. 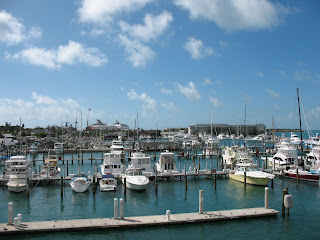 The next morning we split up and I decided to do many of the touristy things. I went to the buoy marking the southern most spot on the continental United States, took pictures of the original lighthouse, toured Hemingway’s home and the local art museum. We met for lunch at Sloppy Joe’s restaurant and had a drink at Jimmy Buffets’ Margaritaville. The afternoon was consumed with a good nap in perpetration for a long night. In the evening we went to the western end of Duval Street to watch the sun set into the ocean and see the street performers in Mallory Square. Some of the acts were very entertaining—magicians, escape artists, vaudeville acts, etc.—others were just out to hustle a few bucks. After the street entertainment we headed for dinner, key lime pie, and then some live music. I crashed long before my friends but we were all able to get up the following morning for our 70 mile ride to Layton (on Long Key). 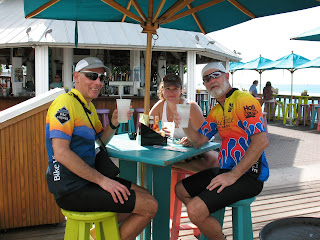 Once again the temperature reached 85 degrees, requiring us to make lots of stops along the way. Mostly we cycled on the shoulder but at times used bike paths when shoulders disappeared or traffic got heavy. I anticipated having some degree of “island fever” on these narrow pieces of land but it never came. Even crossing the “7-mile Bridge” did not raise any concerns. In fact it was fun to stop and watch the birds swoop down over the heads of my friends. It looked like the birds were checking out my friends for their next meal. We arrived at the KOA campground around 4 pm and were told that happy hour just started at the Tiki Bar which meant that putting up our tents and getting showers were going to be delayed. Despite carrying tents and sleeping bags this was our first night to use them. While the KOA was fine, in hind sight I would not carry camping gear on this trip. There are lots of motel options and my bike would have been lighter.

The next morning I woke up to a flat tire, the second one in our group. After a short delay we headed north on Route 1 and parallel bike paths. Some of the paths near Key Largo were in terrible shape but with highway construction we did not have any option. For most of the trip we were averaging 14-16 mph with loaded bikes but even 10 mph was difficult here because of the rough surfaces. (Supposedly, the last phase of the highway construction includes trail resurfacing.) From Key Largo, our Adventure Cycling map recommended that we cycle the Card Sound Road rather than using the more direct Route 1. The local folks that we talked to concurred that this was the better route. They said that the construction on this part of Route 1 required that bikes be transported over some sections. The first part of the Card Sound Road was pleasant with minimal traffic. However, after we crossed the Sound, traffic picked up all the way to Florida City were our 65 mile day ended. 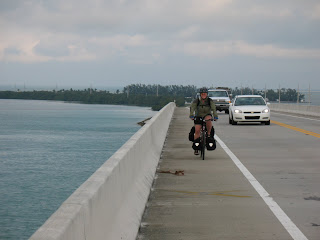 We camped in a less than adequate campground but were so tired that we did not much care about its condition. The next morning we headed to Miami, the end of our cycling trip. Adventure Cycling offered us an indirect route that required lots of map reading. However, we found a great alternative. A just completed “bus way” connected Florida City to Miami and provided us with 20 miles of traffic free cycling. The bus way was built on an abandoned railroad right-a-way that parallels Route 1. Only busses and bicycles were allowed and there were few busses. In Miami we separated, 2 of us headed for the Amtrak Train Station and the third rider headed for Miami Beach for a few more days in the sun.

For those of you who think it unfair that I had a sunny vacation while you were freezing, I want you to know that paybacks can be hell. When I got off the train in Alexandria it was snowing and when I got home I had to shovel the very wet and heavy snow off my walks and driveway. If you are wondering if you saw me shoveling snow I was the guy in bike shorts with tan legs and big smile on my face.
Posted by yellowbiketales at 9:45 AM