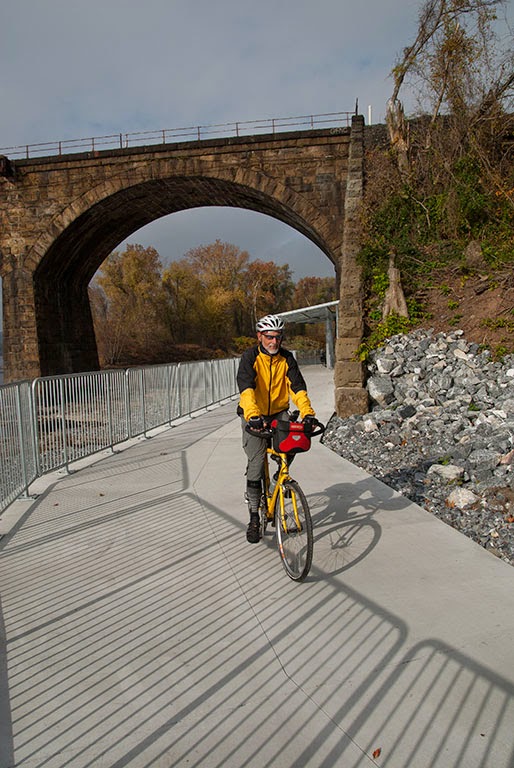 My cycling friend Dirck is also a rail fan (a railway enthusiast that drives miles to experience railroad trains).  Rail trails are very popular with him, but he especially likes rail trails that have active railroads nearby.  When he discovered that the Northwest Lancaster County River Trail ran along a Norfolk Southern rail line, I knew that we would soon be heading there.  This trail runs along the Susquehanna River between Columbia and Falmouth, Pennsylvania.  It is a fourteen-mile long, multi-use, public recreation trail that goes through several interesting river towns.  While the trail is not completely asphalted, it provided an interesting ride on a warm fall day.

According to the trails website (http://www.nwrt.info/), “The trail follows the route of the historic Pennsylvania Mainline Canal and uses some of the original towpath that remains along the corridor. This provides ample opportunities to interpret the numerous industrial archaeological remains such as abandoned canal locks; the iron furnaces at Chickies Rock; and the old quarry operation at Billmeyer.”  While the whole trail is walkable from Columbia to Falmouth, we found that some sections are not ready for cyclist.

We drove from Northern Virginia to Marietta, PA and parked in the Decatur Street trailhead parking lot (one of several trailhead parking areas along the trail). Since the trail heading up the river was paved, we chose to first cycle in that direction.  One only needs to look at Google Maps to see that Norfolk Southern has a main line along the trail and several railroad sidings, creating the potential for seeing trains.  Dirck, was not disappointed.  We soon passed a 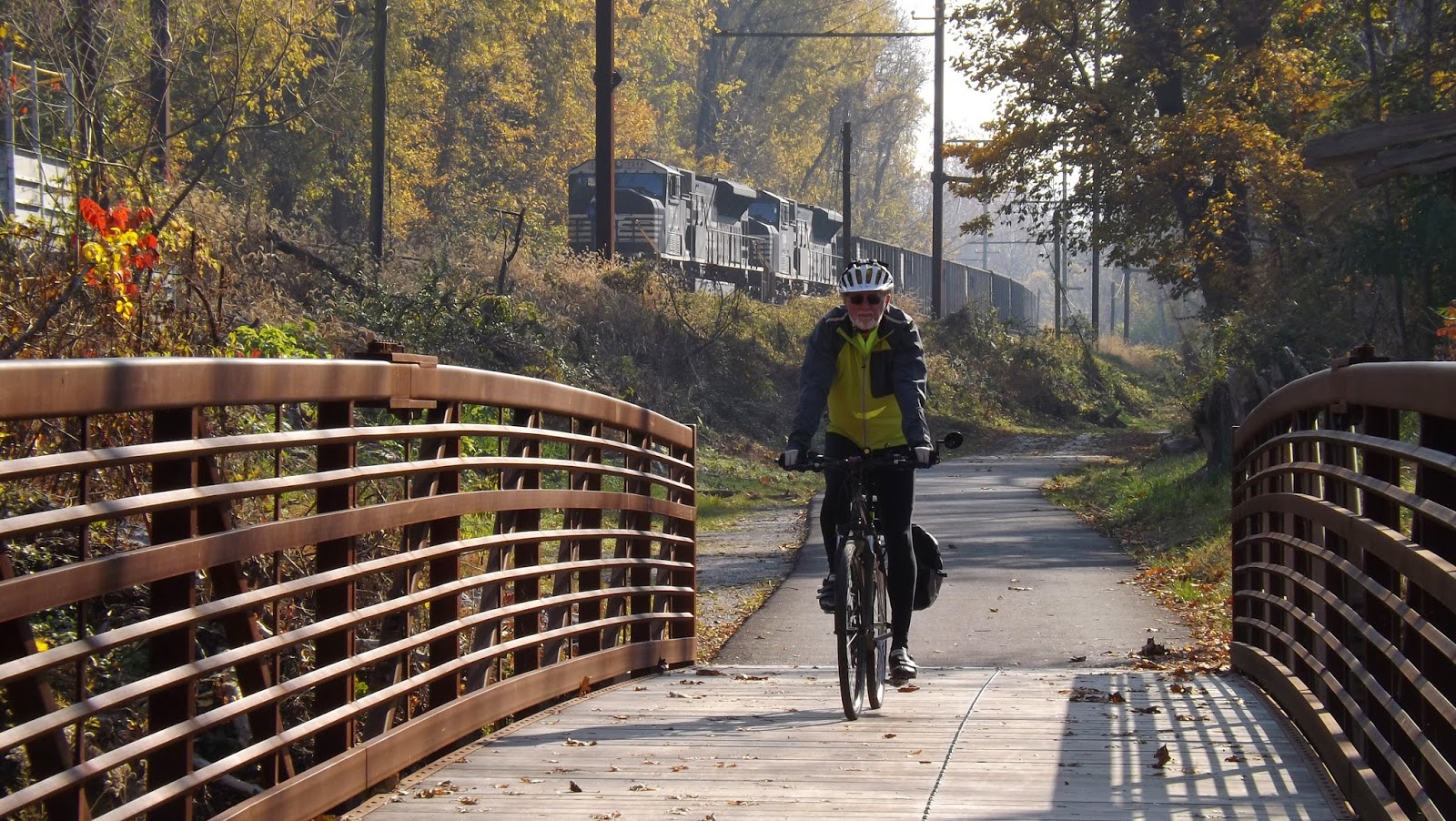 freight train waiting at a signal. While I was focusing on the surrounding scenery, Dirck was checking out the train’s engines. Leaving the trackside (for only a short period), the trail took us along the river and by several farm fields that had recently been harvested.  We soon arrived at Riverfront Park.  We were told that the park is not only at the center of the trail but it is also a great meeting place for trail users, boaters, and picnickers. 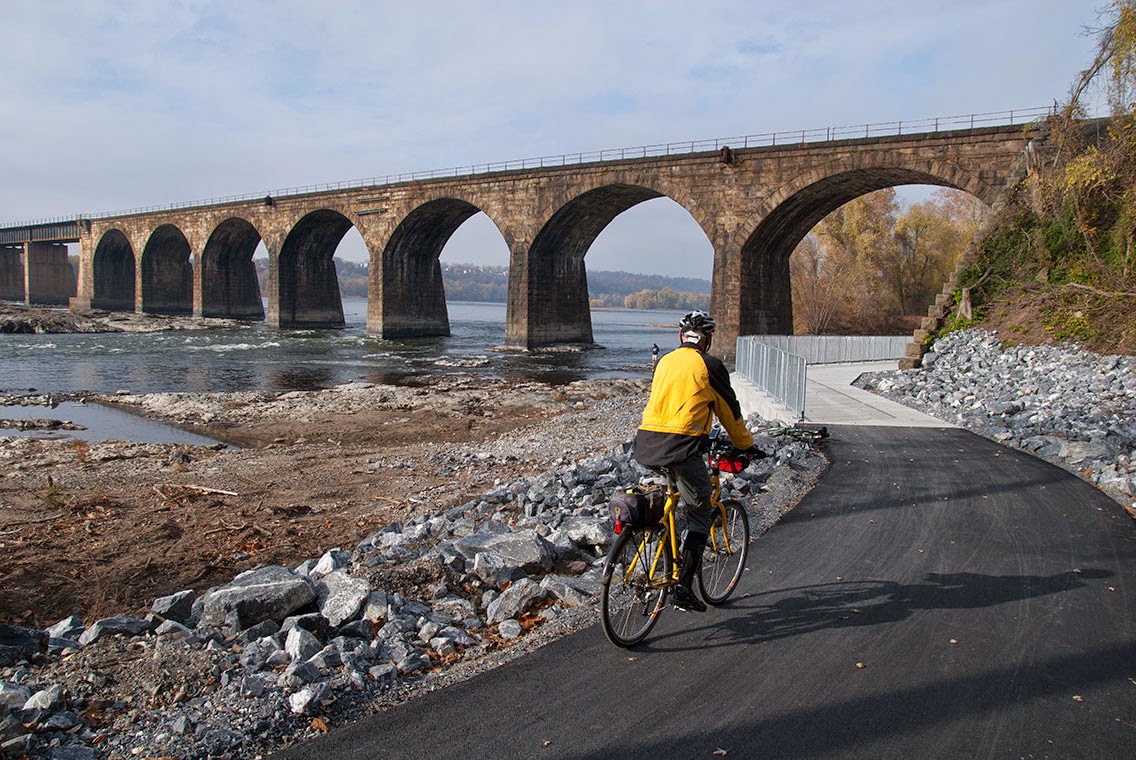 Just past Riverfront Park we cycled under the Shocks Mill Bridge.  This bridge carries railroad trains across the Susquehanna River and had to be rebuilt after Hurricane Agnes destroyed a large section in 1972.  At this point, the trail deteriorated from its nice asphalt to rough gravel.  Our bikes bounced and rattled as we cycled over this section.  However, near the town of Bainbridge, (thankfully) the bouncing and rattling stopped. There the trail returned to a wonderful paved surface.  Bainbridge is a quaint river town. It has a restaurant just off the trail and easy access to the river’s edge.  The town also boasts a popular vineyard with summer entertainment.  Just a few miles away is the famous Three Mile Island electric power plant, site of the near nuclear meltdown in 1979. 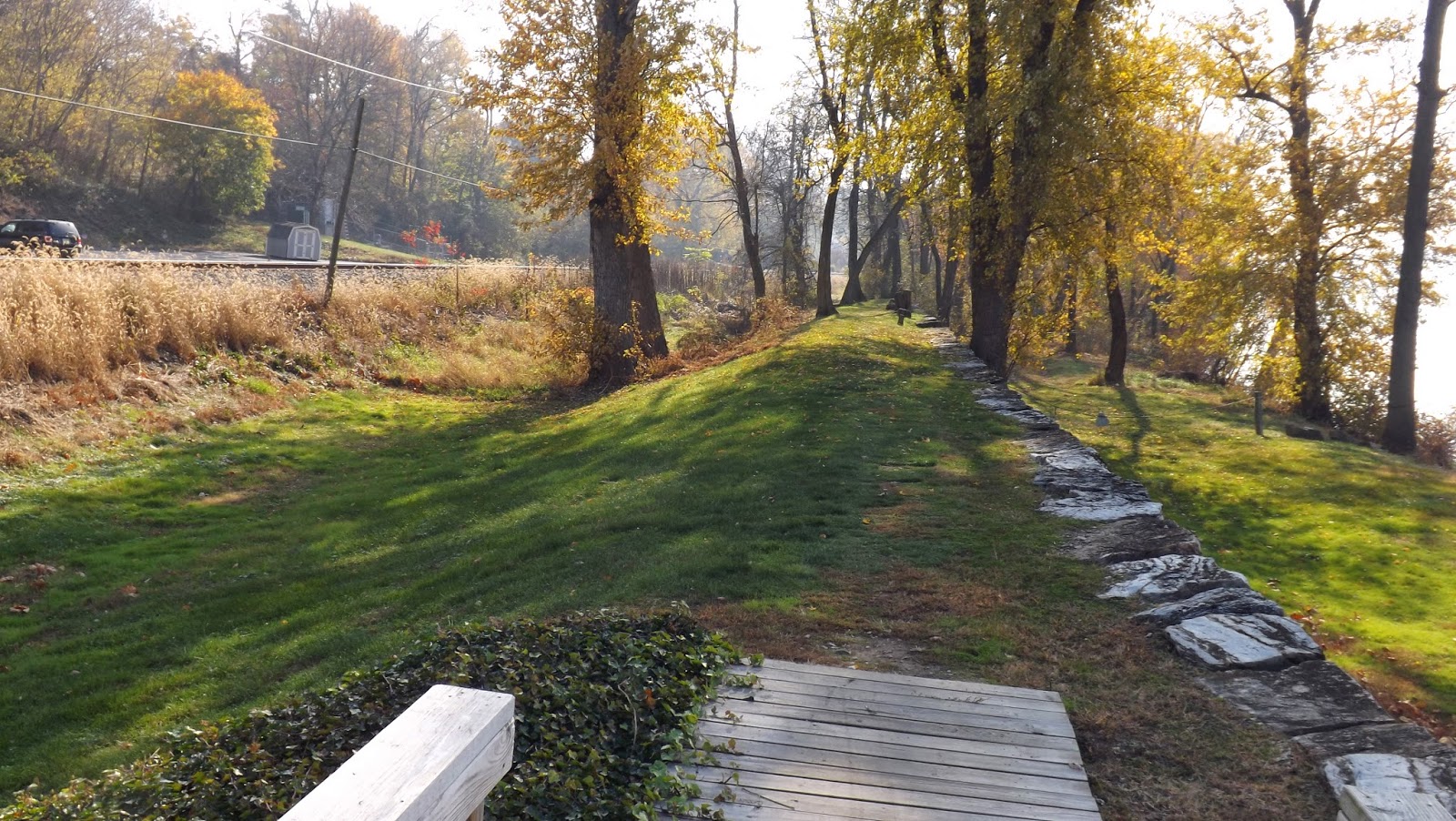 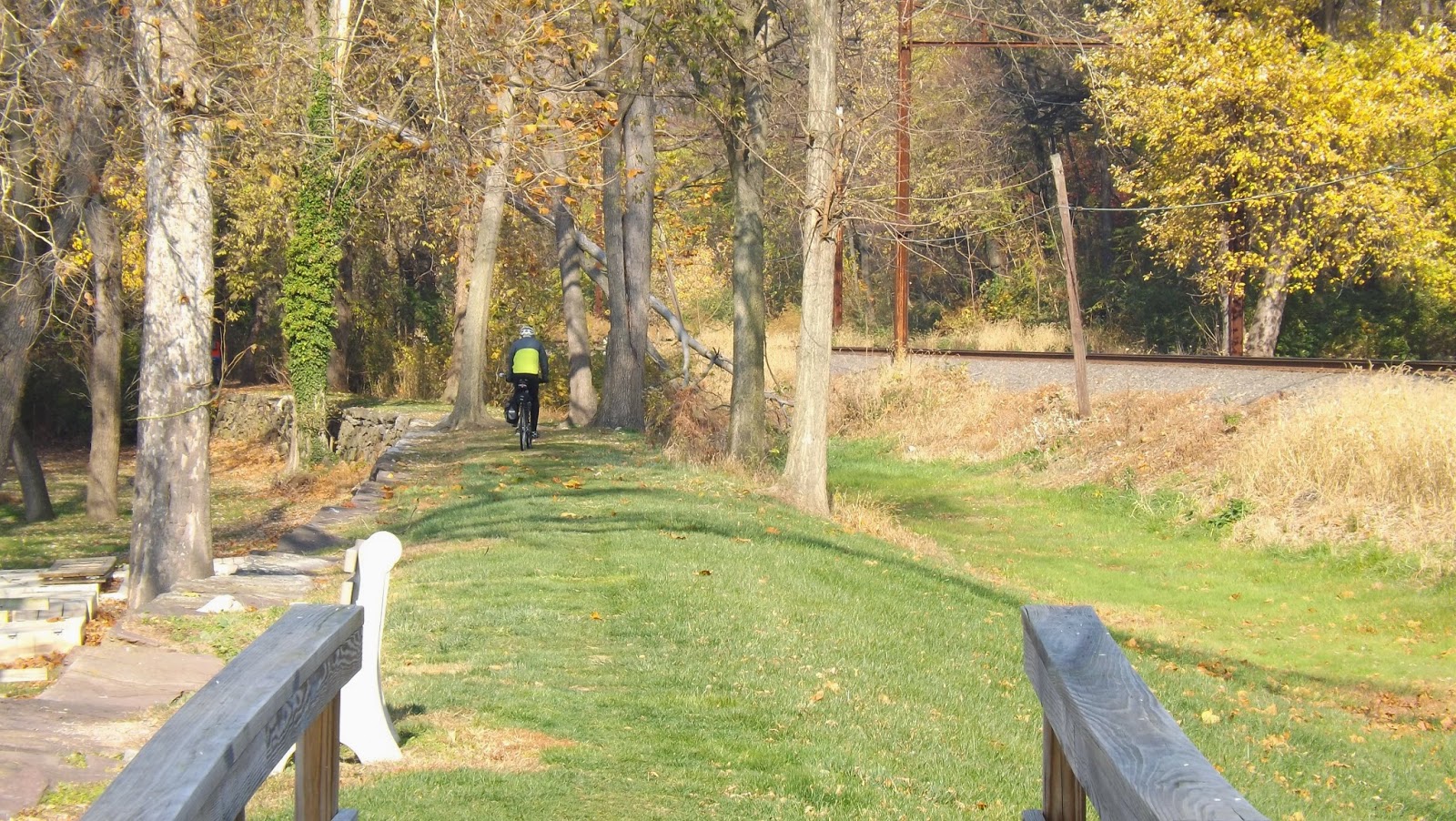 Leaving Bainbridge we set out on the canal’s embankment.  Still clearly visible, the canal was built in the late 1700s to bypass the Conewago Falls on the Susquehanna River.  This section of the trail is nearly 4 miles long and ends in
Falmouth, PA, another river town.  However, the trail is now only designated as a walking trail.  Our ride on this section was cut short after we stopped to talk to a mountain biker.  He was walking towards us pushing his full-suspension 29er bicycle.  He said that the trail was too rough for him and that he had to walk most of the way.  Since we were on road bikes, we decided to turn around.  Cycling this section of the trail would have to wait for another day.

We retraced our route back to the town of Marietta, stopping only so Dirck could look at more railroad trains, check out some of the old railroad artifacts still visible along the way, and talk to other trail users.  As it was getting warmer trail usage increased.  Many of the users were from surrounding towns but, like us, several had driven miles to explore the River Trail.

Upon arriving back at the Marietta trailhead, we decided to cycle through the town rather than take the hiking trail that ran parallel along the river.   We were heading southeast toward the trails other end at Columbia, PA.  Marietta is an interesting and historic town.  It dates back to the early 1700.  Many old homes have been restored and the river town continues it rich railroad history.  While a small town, it has several interesting pubs and restaurants.   Based on recommendations from a few town folks we stopped at McCleary’s Irish Pub for lunch.  Their draft beer choices were extensive and the food was excellent.

At the other end of town, we got back on the trail at Chickes Rock Park.  The entrance to the park still has remnants of the old iron furnaces and rolling mills that used to be a major part of the town’s economy.  Initially the trail took us on park roads.  Once the road ended, we cycled on a packed earth and mulch trail that meandered through a wooded area for several miles.  About mid-point between Marietta and Columbia we came to a large cliff of quartzite rock that a young man and woman we descending.  While they had on the proper safety equipment and ropes, it still looked scary.  I would rather exercise on a bicycle than hang from a rope off a cliff.

About a mile from Columbia, we had to get off our bikes and lift them over a large fallen tree that seemed to have been there for some time.  Nearer to Columbia the trail abruptly 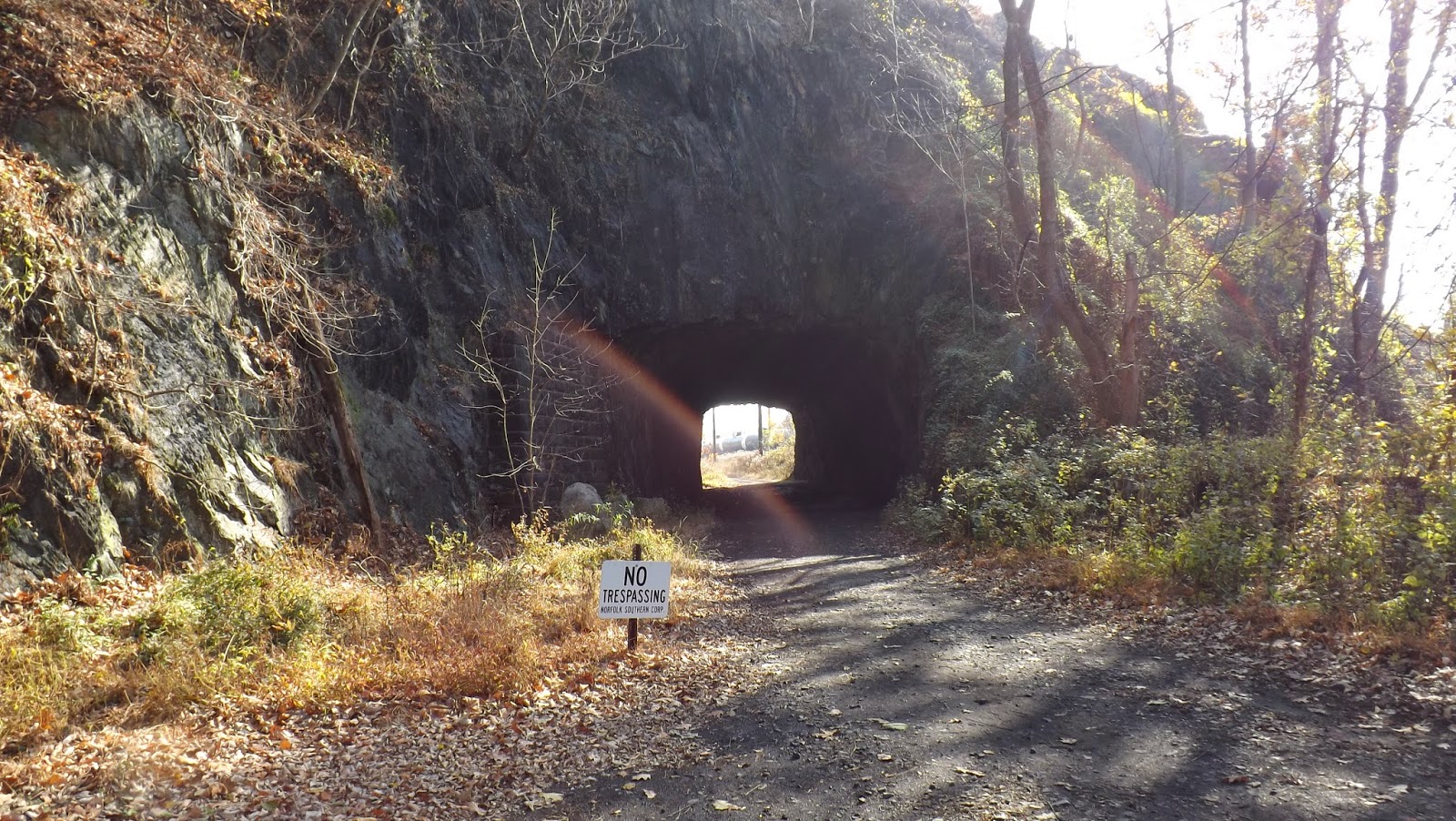 stopped just before a tunnel that led into town.  It appears that the railroad has not yet given over this last section of right-of-way for the trail.  We were disappointed that we could not cycle through the tunnel and visit Columbia from the trail.  Reversing our direction, we stopped below the Breezyview Overlook, far above the trail.  Getting to the overlook required a long climb up the side of the mountain on a switch-back trail.  However, we decided to get there by riding the long way around using the roads.  Regardless of how you get there, the panorama of the Susquehanna River is worth the effort.

We eventually got to Columbia which is the largest of the area’s river towns.  It has more than 10,000 residents with a historic district listed on the National Register of Historic Places…and more trains. Eventually, the trail will end here, at the town’s riverfront park.  This nice park has a great view of the river and some remaining Civil War era bridge piers. Other great Columbia attractions include the National Watch and Clock Museum, featuring a collection of over 12,000 time pieces, the Columbia Historic Market House, and the First National Bank Museum.

After loading our bikes on top of the car, we headed back to Northern Virginia.  Since Dirck was driving, our route took us by railroad sites in the Pennsylvania towns of York and Hanover, and the Maryland towns of Walkersville and Brunswick.  While Dirck was enjoying the trains in these towns, I was fantasizing about how those railroad right-of-ways would make great rail trails.

Posted by yellowbiketales at 10:19 AM