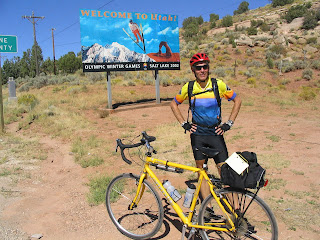 
September 16: The journey began with an early morning flight from Dulles Airport to Las Vegas, NV. While in Las Vegas Larry (a friend from Northern Virginia) and I did the usual tourist things. As “big spenders” we each risked one dollar on the slot machines. 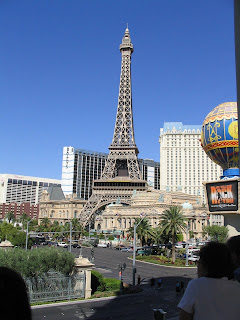 I played the quarter machine and Larry played the penny machine. I was board with the slot machine and quit after losing my dollar. Larry could figure out all the buttons and leavers on the penny machine but once he realized that he was $1.92 ahead he quit playing. After that we walked down the strip checking out the eclectic architecture, tourist, and the other people on the streets.

September 17: Cycle America (our tour provider) met us at the hotel where we loaded our gear and bikes for the trip to the north rim of the Grand Canyon. We stopped at St. George, UT where we met the rest of our group and transferred from vans to a bus for the remaining portion of the trip. Cycle America made all the arrangements, provided lodging and meals, and carried our gear each day.

When we got off the bus we were literally on the north rim of the Grand Canyon. The canyon rim lay just a few feet from where I pitched my tent. What an awesome view and what an awesome place to camp! I never imagined the canyon as I saw it. Photographs and TV images don’t capture the canyon’s grandeur. 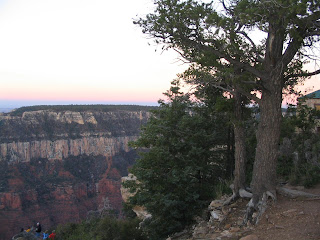 That night we had dinner in the Lodge and our table overlooked the canyon. My dinner companions were Larry, John (a hard core cyclists from Florida), and Kelly (an ultra-marathoner from North Carolina). After dinner John led us back to camp taking the rim trail. Despite the dark it was a scenic 1.2-mile walk just feet from the canyon’s edge.

During the night the winds roared like a freight train but my tent was calm. I was hearing the draft coming out of the canyon—it was hot in the canyon and cool on top—not surface winds.

September 18: Today started with an early morning walk (temperatures were in the 40-degree 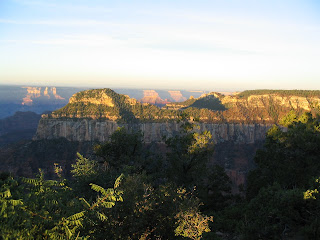 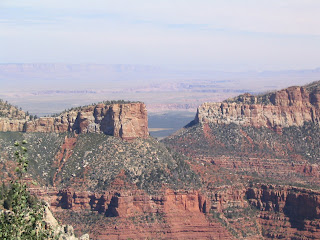 Our 22-mile round trip ride involved several climbs but the view of the eastern canyon was worth the effort. At the top Larry and I met Tracy (from Minnesota) and Lily (from Holland but living in Switzerland) and a couple riding a tandem with a place for their dog.

September 19: The serious cycling begins as we head 80 miles to Kanab, UT (on our way to Zion National Park). It was a cold start with temperatures again in the 40-degree range. However the day quickly warmed up and I stripped along the way. We climbed 2,500 feet out of the Park and got unto a flat open prairie that went for miles. We climbed to over 8,800 feet before we stopped for lunch at Jacob Lake (43 miles into our ride). At mile 55 we reached the scenic view of the Vermilion Cliffs National Monument Wilderness and then we descended into the desert—a 6 percent grade and drop of 5,000 feet. My average speed for the day was 15.4 miles per hour. 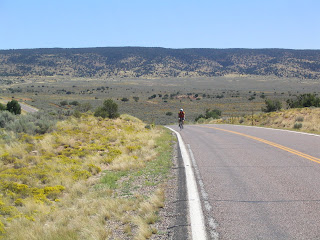 Part of my speed must be attributed to the terrain but some resulted from my trying to catch Larry. At one point I stopped to strip off some extra clothes which took me less than a minute. When I started up again I could not see Larry. I cycled faster and faster but could not get a glimpse of him. Unknown to me Larry pulled off just after I did but I did not see him. He spent the hour trying to catch me as I was racing to catch him. We both had a good laugh when we met at the lunch stop.

That night we camped at a commercial campground. Our dinner was provided by the Lariats—a high school dance team—as a fundraiser. They made us a Mexican meal and served it in a school cafeteria. Afterwards the Lariats performed several routines that they were planning to use in national competition.

September 20: Our day started with breakfast at Houston’s Trails End restaurant in Kanab. Cycling that day should have been easy with only a 45-mile journey to Zion National Park. However, I found it tiring.

Just out of Kanab we passed Best Friends Animal Sanctuary—a several thousand-acre shelter that takes in animals from around the country. Many of the cyclists stopped for a tour of these facilities. Larry, Tracy, Lily and I cycled together most of the day. We took a side trip to find the Pink Coral Sand Dunes State Park but after cycling several miles off-route we were told that the 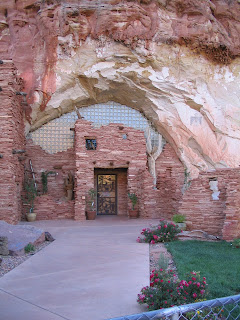 park was still 10 miles away. We turned around and got back on route. We next stopped to see a home built into the mountain and a scenic view of rocks reflected in water. 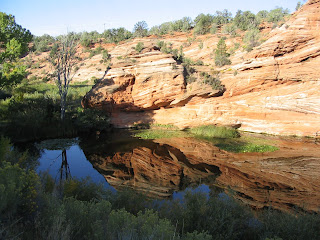 Entering into Zion Park was a treat. We cycled through the park’s natural wonders of colored stone wore away by the winds and rains. It was a great photo opportunity. At mile 35 we came to a 1.1-mile tunnel that went through the mountain. Cyclists are not allowed in the tunnel and we had to wait for the van to ferry our bikes to the other side. While waiting we hiked up the mountain to view both sides of the tunnel and the downhill ride that awaited us on the other side. Once we got through the tunnel we enjoyed an easy ride to Springdale—which is just at the other end of the park. We camped in a commercial campground and had our meals at the Soul Foods restaurant.

September 21: Rather than cycling we took the park’s shuttle bus to the other end of the park where we started our hikes. The first hike was the river walk into the Narrows. The Narrows is 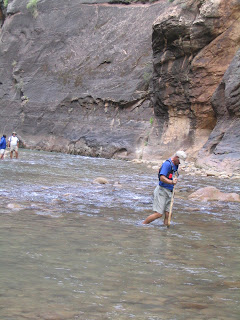 literally where the canyon narrows around the Virgin River. Since it rained the night before and showers were expected during the day, the park rangers recommend that we not take this hike. However, we decided to go a little ways (less than a ½ mile into the canyon) and stopped where the water got over our knees. Many others kept going including a German couple that we spoke with. Without any apparent inhibition they dropped their packs and changed into swim wear before continuing. Our next hike was up to see the Emerald Pools. This hike involved a lot of climbing above the river and we were rewarded with some great views.

September 22: Leaving Zion was hard because there was much more to see. My hope was that the nest park would be at least as good. Our trip to Brice National Park was to be 84 miles. It started out with a climb back up to the tunnel where we had to wait a little while for the van to shuttle us through. It was a nice climb with several switchbacks and great scenery. After getting through the tunnel we repeated our great ride through colored and carved hillsides. We saw sever sheep grazing on one hillside and the ram put on a show for us by climbing to the top and providing a great profile view. After leaving the park we had an easy ride past a Buffalo Ranch to Mt. Carmel Junction were we headed north on a long climb through Orderville and Glendale (at 5,800 feet) where the climb increased to 6 percent. We reached 7,500 feet after lunch and descended for 10 miles to 6,800 feet. After which we had to again climb as we cycled through Red Canyon up to Ruby Inn (at 7,700 feet) just outside Bryce Park. We camped behind the Ruby Inn and ate our meals at the Inn.

September 23: In the morning a van took us from Ruby’s Inn to Bryce National Park. At first there was not much to see. It was only after we left the van and walked to the canyon’s rim did we see this park’s wonders. It was like looking over thousands of giant multi-colored chessmen. These formations are called Hoodoos. After taking the rim walk we headed down into the canyon along narrow trails on Navajo Loop and Peekaboo loop through the Queens Garden. Hiking back up we went through a formation called “wall street” for its narrow passageways and steep walls. It was a steep walk with lots of switchbacks. The earlier trails were relatively free of other hikers but this climb was very popular—with most folks heading down while we were climbing. Later we had lunch in one of the lodges near the rim and then took the van back to camp.

September 24: Today’s ride was 85 miles to Cedar City going over Cedar Breaks at 10,600 feet. It started out with a 20 mile down hill ride where we dropped a few thousand feet before we 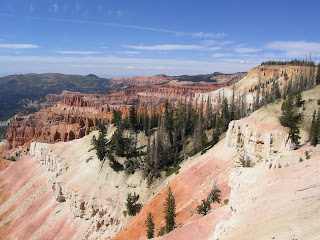 started a 40-mile climb of 5,200 feet. This part of the ride was tough—besides the 4-8 percent grade we had a strong head wind with even stronger gusts hitting us head-on. By mile 52 (our lunch stop) many cyclists quit riding and took the van. I was also tired and wanted to take van but it was full when I tried to board. Rather than waiting for the van’s return, I decided to continue cycling. It took no more than a ½ mile for the road to turn and cycling became relatively wind free for the rest of the climb. I cycled to the top of Cedar Breaks but was disappointed when I could not find the elevation sign for a picture. Unlike the rest of the day’s ride, the last 20 miles were very fast with downhill grades of 6-8 percent. We camped in Cedar City and had dinner in a nearby Mexican restaurant.

September 25: At 7:30 a.m. we are packed and head to Las Vegas through St. George where some of the cyclists left the group to fly home. I arrived in Las Vegas at 10:00 a.m. giving me time for lunch before boarding the plane home. I landed at Dulles around 8:30 p.m. and I was home by 10 p.m.
Posted by yellowbiketales at 7:20 AM