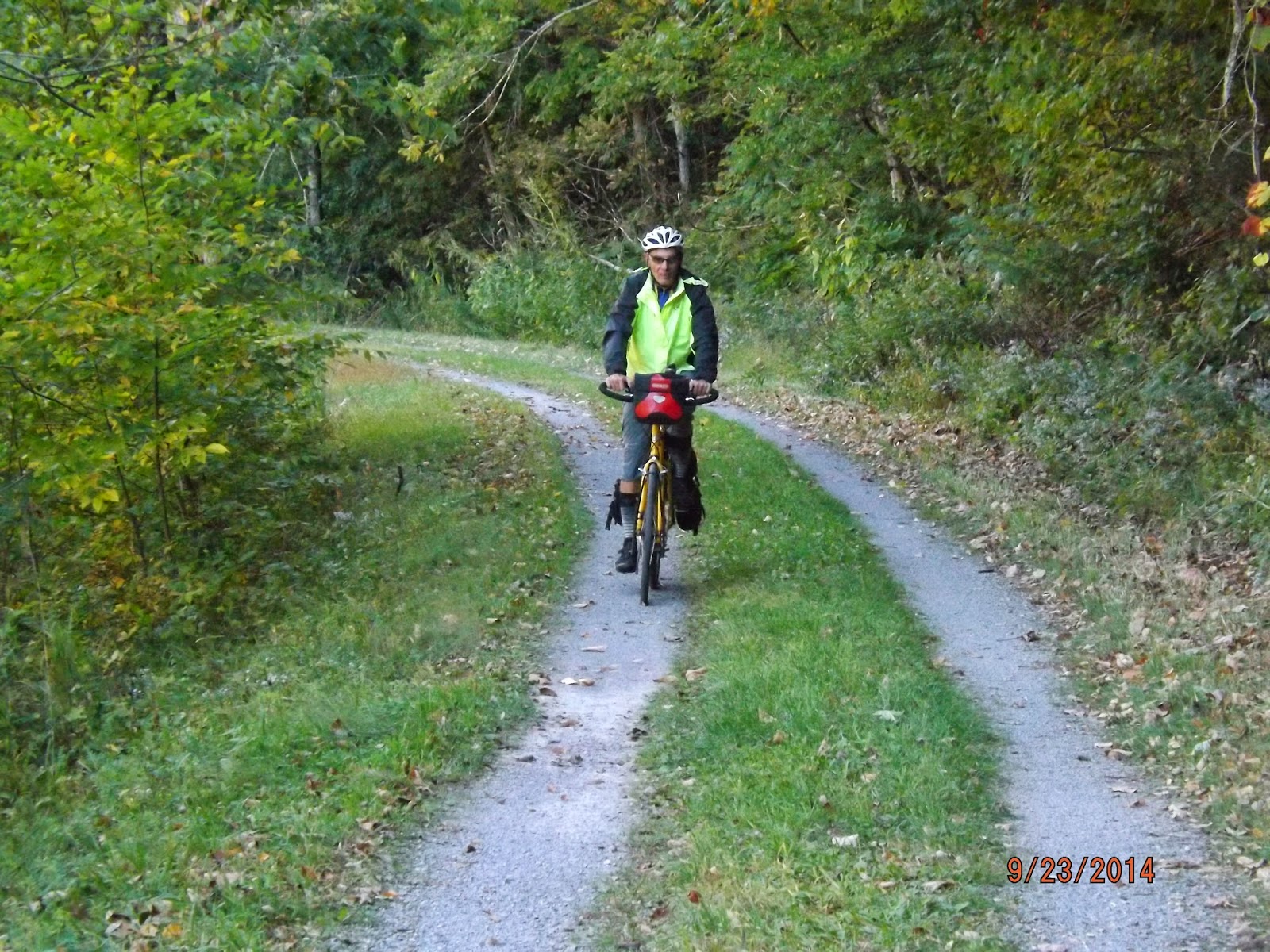 In late September, wanting a long ride before the weather turned cold, I headed to West Virginia’s Greenbrier River Trail (GRT).  I have always found driving in West Virginia to be challenging, but it is always worth the climbs and twisting roads.  This trip was no different. 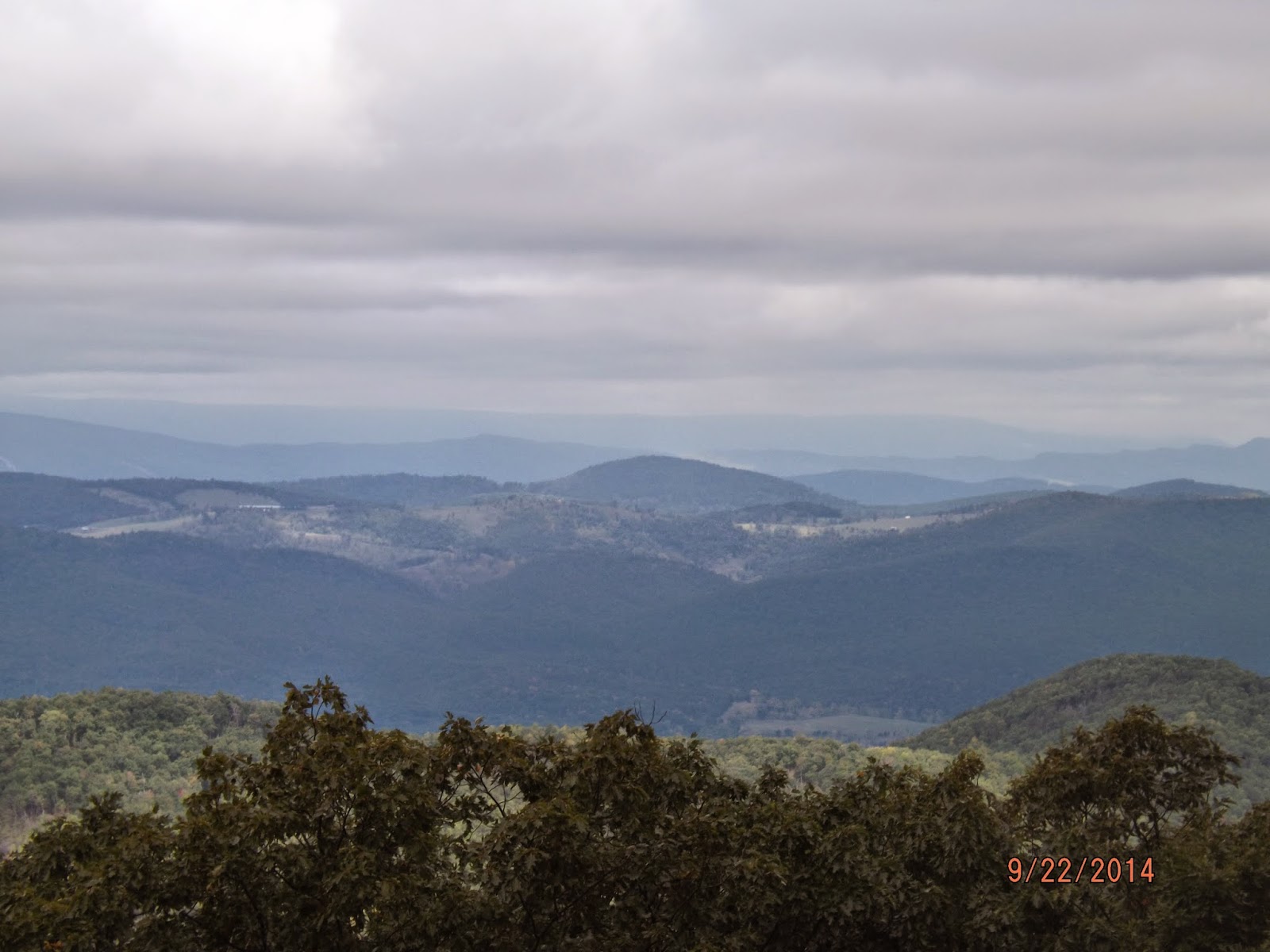 The GRT is part of the State’s park system and runs 80 miles between towns of Cass and Lewisburg, West Virginia.  For all practical purposes, this is a flat trail with just over 700 feet of elevation change from end-to-end.  During my ride, I wondered why my drive involved so much climbing to get to such a flat trail.  The trail’s surface is mostly packed gravel and provides relatively easy cycling. 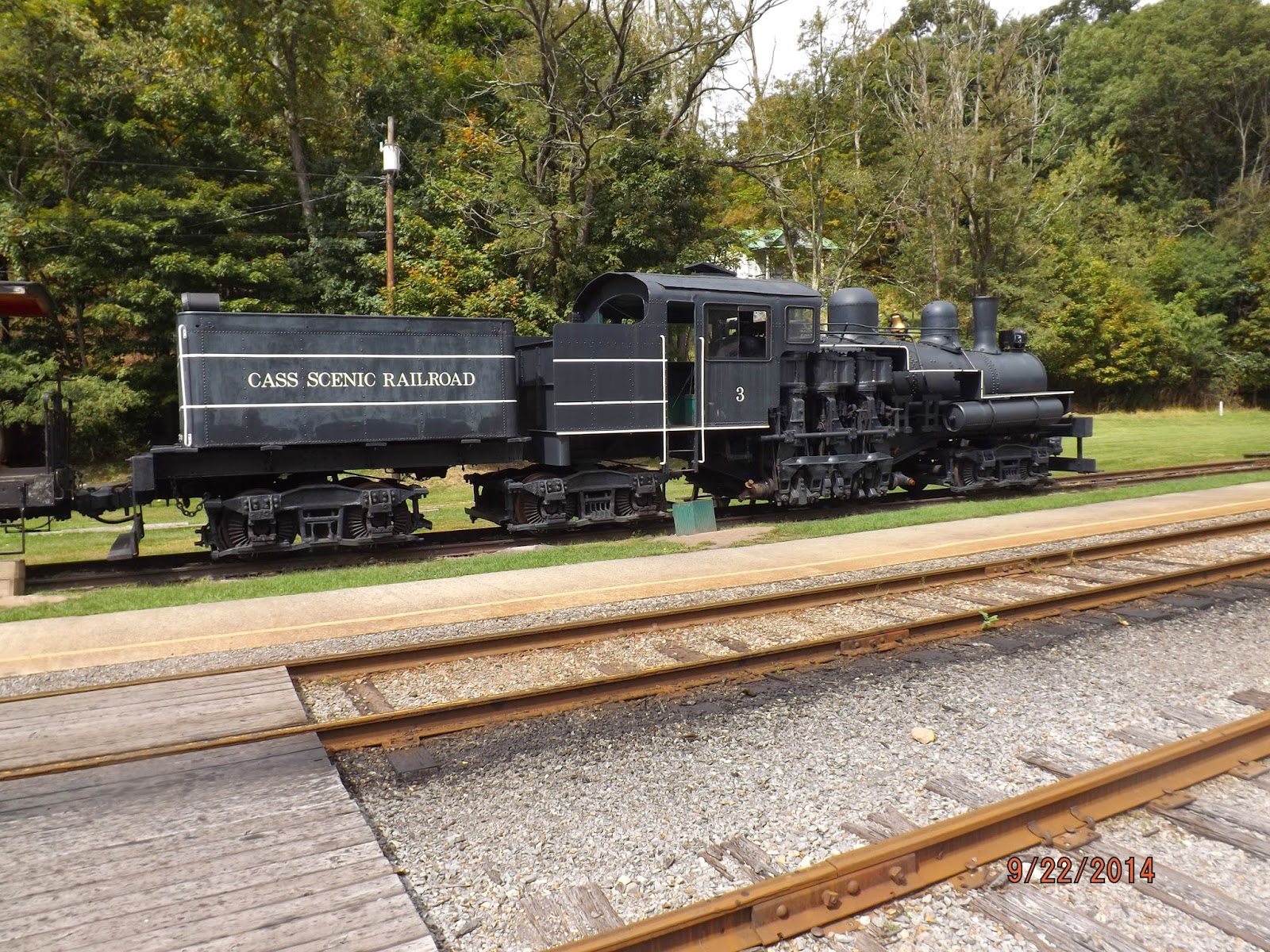 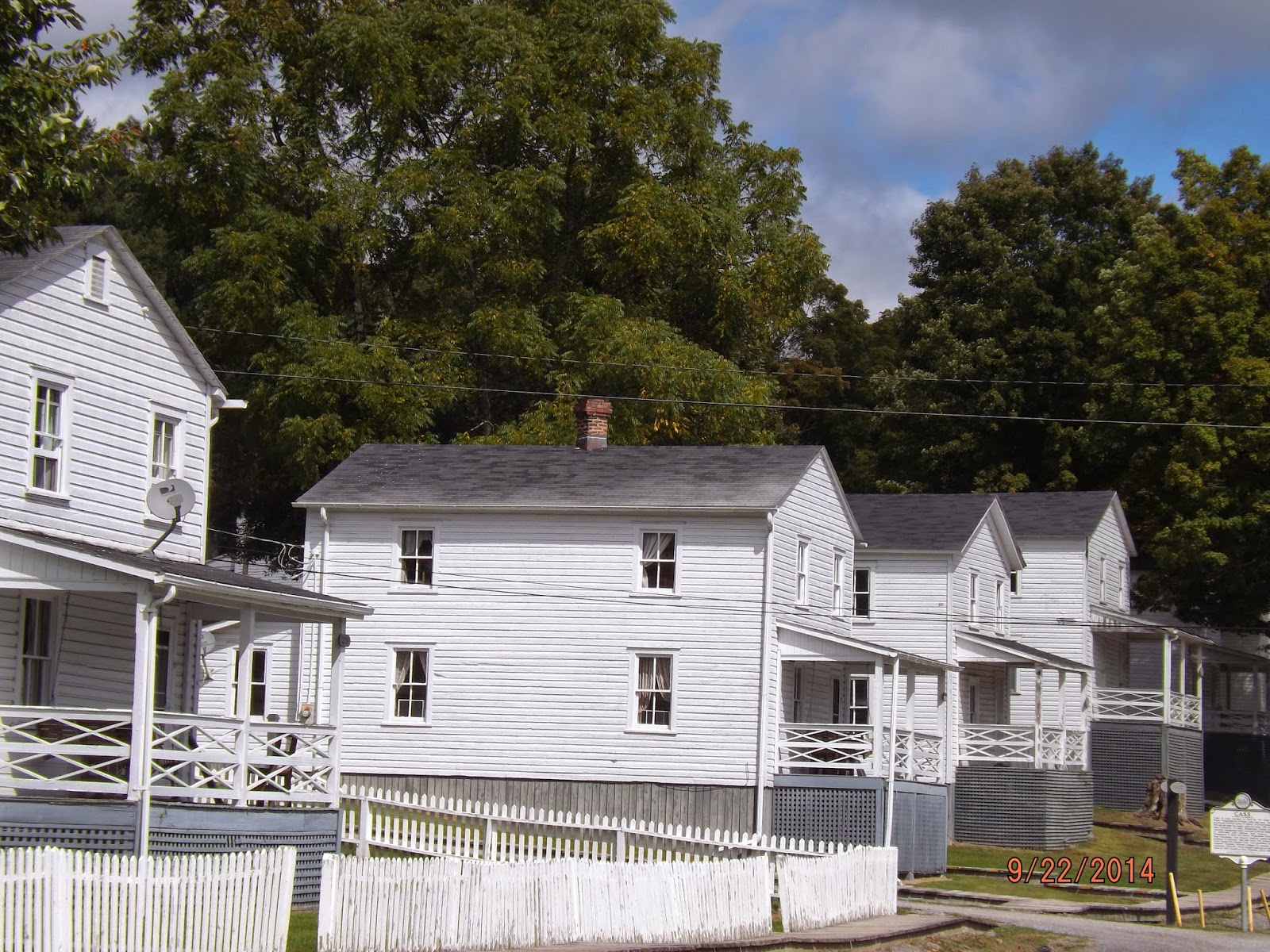 I left my car in Lewisburg and used a shuttle service offered by Free Spirit Adventures (www.freespiritadventures.com) to take me to Cass to start my ride south.  While several shuttle services are available, Free Spirit seemed to best accommodate my needs and schedule.  In addition to the trail head, the town of Cass is also home to the Cass Scenic Railroad State Park.  Here you can embrace the town’s logging history by riding a steam driven logging train up into the mountains.  Cycling out of Cass to the trail head (about ½ mile) I passed the many “company houses” that have been restored and are available for rent.  In contrast to historic Cass, just a few miles away is the Green Bank Science Center that houses the National Radio Astronomy Observatory.  Taking in both sites, allows one to go from train travel to space exploration with just a few miles of additional cycling.

I started cycling early in the morning with a definite fall chill in the air (it was only 39 degrees F) and with low hanging fog hiding much of my surroundings.  I anticipated cooler temperatures and brought along my panniers to carry the clothing that I knew I would shed along the way.  As the fog lifted, I realized that my visit on the GRT was premature to enjoy the fall’s changing colors.

One reason that this trail appealed to me was its extensive integration into nature.This is in direct contrast to the urban trials, where I do a good deal of my cycling. Trail literature promotes the area’s remoteness: it “…lies adjacent to the Monongahela National Forest, Seneca State Forest and Watoga State Park for most of its length…” I was not disappointed. 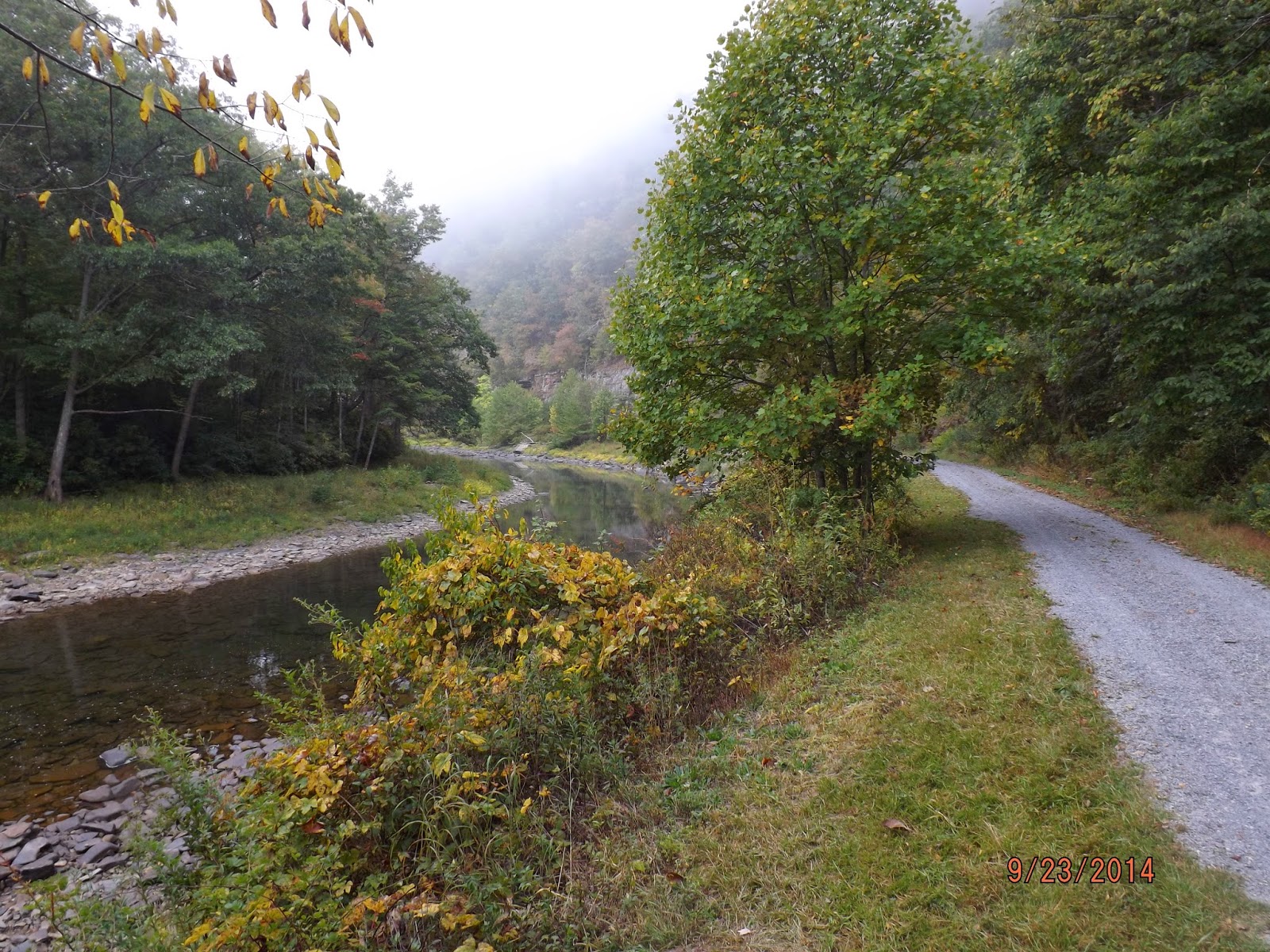 In the first 20 miles I only shared the trail with deer, lots of deer, a few ground hogs, and a bald eagle.  The only disappointment was the lack of water in the Greenbrier River.  In many places the water was so low I could have walked across the river, without getting my ankles wet. 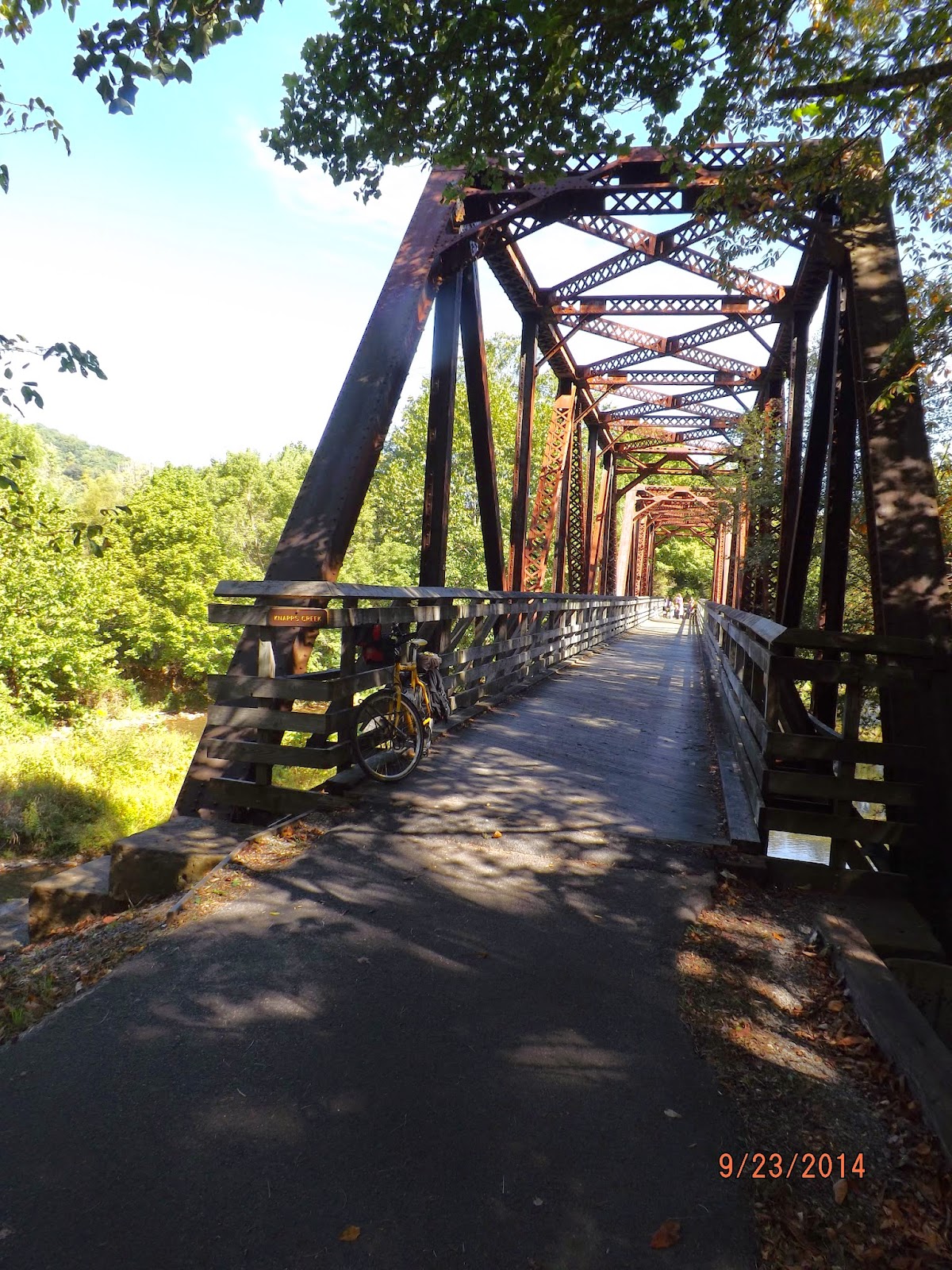 About 15 miles from Cass, I encountered the first of the trail’s 2 tunnels—Sharp’s Tunnel.  This tunnel dates to 1900 and is just over 500 feet long.  The tunnel curved, blocking my view of the other end.  However, it only took a few minutes to let my eyes adjust and I was soon out the other side where I immediately crossed the river on a bridge.  While this was a typical wooden trail bridge, some of the railroad’s steel trestle bridges are still used on the trail.  I was now 10 miles from Marlinton, West Virginia.

I soon encountered the first, of the few other trail users I saw.  This man was on a 2 week cycling vacation, stopping at all the rail trails between his home in Alabama and Washington, D.C.  Heading north east allowed him to cycle 2 of Virginia’s great trails—the Virginia Creeper and the New River Trail.  Before going our separate ways, he was kind enough to take my picture cycling on the trail. 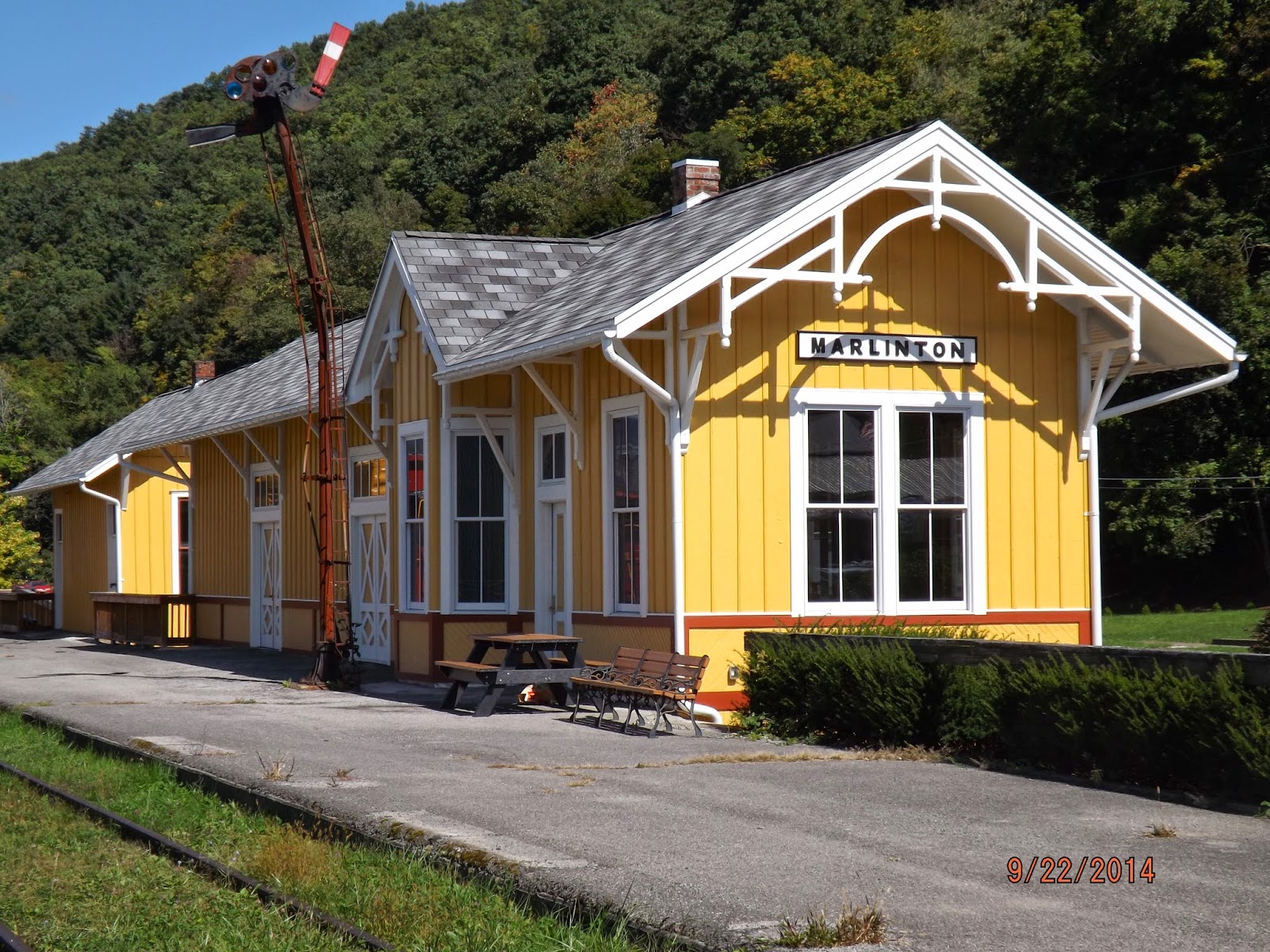 Marlinton is the only “town” on the trail.  In Marlinton I saw the last remaining railroad water tank
on the GRT.  It was erected in 1932 for the Chesapeake & Ohio (C&O) railroad and has been restored. The town’s 1901 depot is also being restored after being damaged by a fire several years ago.  The railroad came into being to carry logs down river in the early 1900s.  After seeing how low the river was, I understood why the logging companies gave up floating their harvest downstream.  Rail passenger service continued until the late 1950s and the C&O’s freight service was terminated in the late 1970s.

I reached Marlinton at lunch time and asked several folks for recommendations on where to eat.  I prefer local business that let you experience the town’s charms.  The response was unanimous, and I headed to Rayetta’s Lunchbox.  This was a real find.  It was full of folks that Rayetta addressed by name.  When it was my time to order, I naively asked for a menu and was told that there was none.  Rayetta served only 3 things, hot dogs, nachos, and a daily special, which I purchased—tomato bisque soup and a grilled cheese sandwich. When finished, I spotted some chocolate marble cupcakes with a fluffy caramel icing.  The cupcake tasted as good as it looked but it cost as nearly as much as my soup and sandwich.  However, it was well worth the price and I know that I would burn the added calories as I headed south.

While most of the trail is crushed gravel, the trail through Marlinton is asphalt.  The paved section provided smoother and faster cycling, but it took away from the rest of the trail’s natural setting.

Before leaving town, I peeled off another layer of clothing.  I was beginning to relate to an onion.  Heading south, I took note of the many trail-side camp sites.  I believe that there were more than a dozen such sites. Most locations had packed gravel tent pads, a picnic table, and pit toilets.   Some also had water pumps and Adirondacks (a 3-sided wooden building) where several people could sleep.  In addition to on-trail accommodations the trail guide identifies many off-trail lodgings.  These included motels, bed and breakfasts, cabins, and campgrounds.

Pearl Buck’s birthplace can been seen in the town of Hillsboro (just a short ride off the trail).  She is best known for her novel “The Good Earth” which won the Pulitzer Prize in 1932 and the Nobel Prize for Literature in 1938.  Her home is only 2.5 miles off the trail and only about 200 feet of climbing.  It was an interesting side trip. 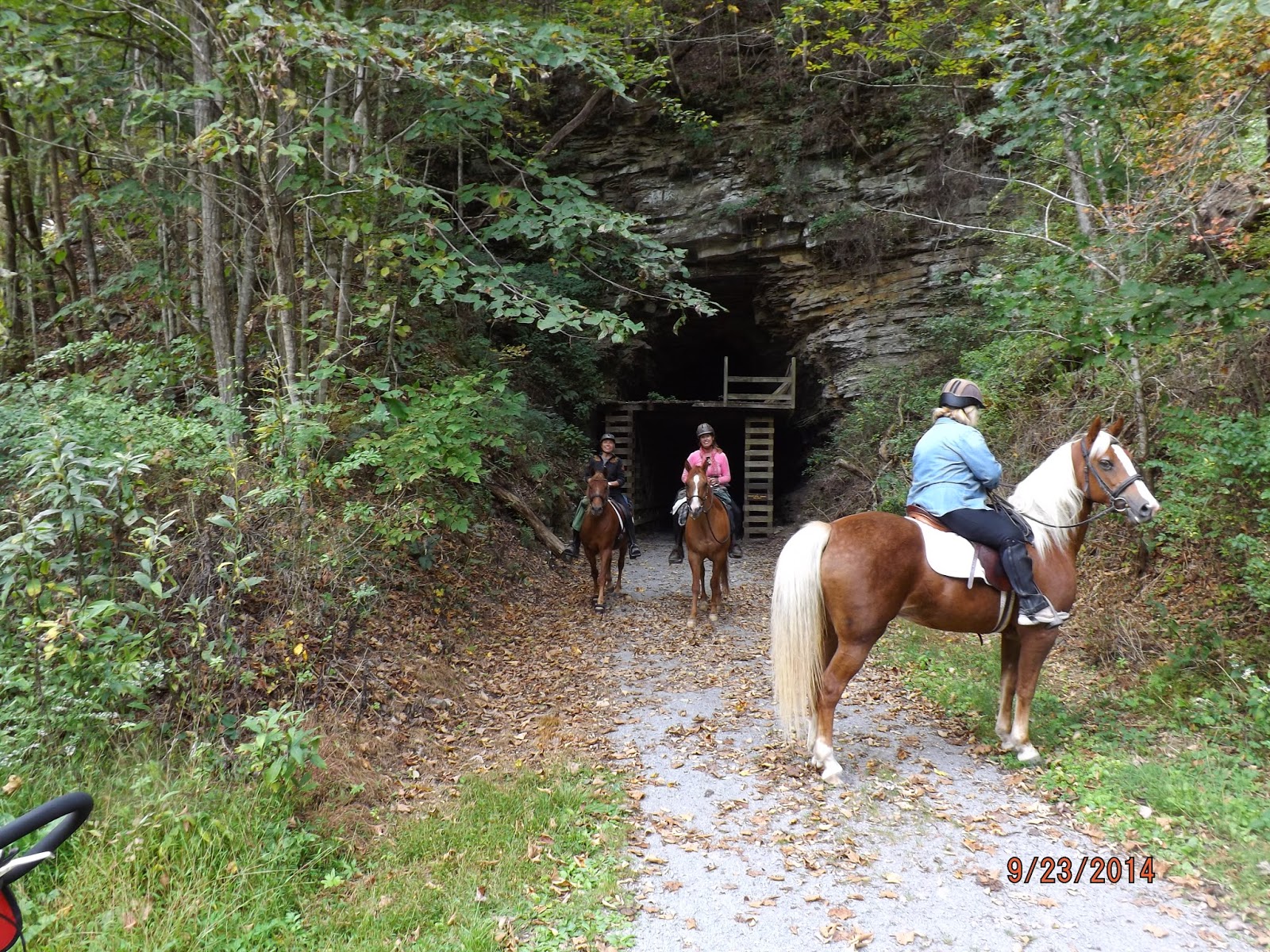 About 50 miles into my journey I came upon the trail’s second tunnel.  The Droop Mountain Tunnel

is only 400 feet long.  At the tunnel entrance I head voice coming from the tunnel and decided to wait to see who would emerge.  In a few minutes 3 women riding horses came out.  I am glad I waited; I don’t know how I would have made out in the dark with 3 horses coming at me head-on.  The women stopped to talk and asked me to take some pictures for them. This was the first time one of the women was able to get her horse to go through the tunnel and she wanted it documented. Like the first tunnel, this one also curved and required waiting for my eyes to adjust to the low light before going through.

Other than Marlinton, the trail provides mostly wilderness cycling.  However, there are some sections along the way where cabins can be seen on the river bank.  Other than these cabins and a correctional facility that abuts the trail near mile post 39, I was just “one with nature”.  The lack of cell phone service also helped keep me focused on the joys of my solitary time away from my normal urban life.

Approaching the trails end, I started to encounter other trail users, mostly cyclists and dog walkers.  I am usually the “slow rider” and I am usually passed where ever I cycle.  However, this is the first ride that no one passed me and I went 80 miles.  While I would like to think that I was faster than other trail users, in reality the trail was just not busy at this time of the year.  I ended my solitary sojourn with a beer and dinner in a crowded Lewisburg restaurant.
Posted by yellowbiketales at 7:44 AM