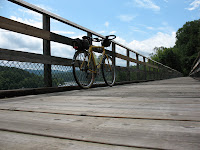 I suspect that most of you, like me, keep a file of places that you would like to cycle…some day. Over the years, I have opened this file and pulled out Tom Gibson’s excellent article on the New River Trail (SPOKES, June 2004) and have wondered when I would experience this wonderful trail. Finally, in the late summer of 2009, I found myself enjoying the New River Trail and the surrounding area of southwest Virginia. The trail is only part of the richness of this area. It abounds in outdoor sports, music, arts, antiques, cafés, and restaurants. I spent 3 days there and wished that I planned a much longer vacation. Because it is such a wonderful cycling destination, SPOKES asked me to provide an update to Tom’s article. 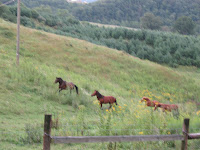 The New River Trail is a Virginia State Park that runs northwest 57 miles from the towns of Galax and Fries to the town of Pulaski (near Interstate Highways 81 and 77). Cycling this trail became reality when good friends invited my wife and me to visit them at their summer home in Galax. How much better could it get? Their home sits on a hillside overlooking the Cliffview trail head and a pasture full of wildflowers and horses.

To cycle the trail in one day I selected one of the several shuttle services (Blue Cat Outfitters, located in the town of Fries just off the trail—276-744-2027) to take me to Pulaski for the start of my trip. Blue Cat offered to pick me up in Galax; however, I chose to cycle the trail to Fries. The trail forms a “Y” with Galax and Fries at the top end and Pulaski at the bottom. While Galax and Fries are about 5 road miles apart, they are about 15 trail miles from each other. Thus my cycling day was much longer than the trail’s 57 mile length.

The town of Fries is on the trail’s New River branch and Galax is on the Chestnut Creek branch. My shuttle driver told me that the name “Blue Cat” was derived from a local Native American Tribe. In addition to its shuttle service, Blue Cat offers bike, canoe, kayak, and tube rentals. They also offer guided tours, tipi rentals at their primitive river-side campground, and fishing trips.

The New River is one of the few rivers that flow north. Thus, starting at Pulaski meant that I would be cycling against the flow and presumably “up hill.” However, being a rail trail I figured that the grade increase would be very modest (usually 1 percent inclines). Before hitting the trail I explored Pulaski’s historic district. There I found an active community with interesting shops and restored historic buildings. At the Pulaski trailhead I enjoyed the restored railway station and museum. The museum offers displays of the history and culture of the Pulaski area.

Leaving Pulaski, I quickly saw why the trail has been designated a National Recreation Trail by the U.S. Department of the Interior. Its packed gravel surface led me into a wooded wonderland and after a few miles, I was cycling parallel to the New River. The river is approximately 320 miles long, flowing through the states of North Carolina, Virginia, and West Virginia. From what I could see from the trail, the river would be great for water sports. 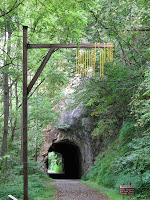 When I am on a rail trail, I imagine what went before. In the early morning mist I could see a Norfolk and Western freight train hauling lumber to one of Galax’s furniture factories. Once the lumber was unloaded, the train would then be reloaded with the finished furniture before heading north to the train’s main line. Like me, the trains would go through two tunnels, the longest nearly 200 feet; cross three major bridges, the longest at Fries Junction is over 1,000 feet; and, according to trail literature, nearly 30 smaller bridges and trestles. This trail was originally part of the New River Plateau Railroad Company that was eventually absorbed by the Norfolk and Western Railroad. The right-of-way was abandoned in 1985 and later donated for the rail trail. 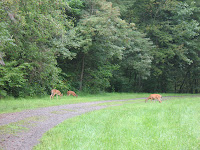 The day I cycled the trail it was virtually deserted. Our 3 day vacation in the New River Valley was characterized by overcast skies and intermittent afternoon showers. I suspect that many trail users stayed home to avoid the wet weather. However, I did meet a few other trail users, most of which were deer but some were people. Just out of Pulaski I met a group from Ohio who were RV camping nearby and were on their cruiser bikes doing a short ride. They told me that while their trail back home was the best, they really liked the New River Trail. Their big tires were ideal on the packed gravel trail but most any bike would be ok. My touring bike with its 37mm wide tires worked fine. 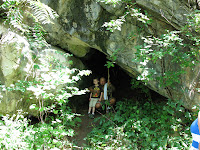 Near Foster Falls Park, I met a family who were exploring a small cave adjacent to the trail. As I arrived, a father and his young son were emerging into the light. After posing for a photograph, they told me that the cave went into the mountain about 30 feet. Once inside they found old bones and evidence of earlier explorers. Being somewhat claustrophobic, I accepted their report at face value and wished them well as I continued cycling on the trail to the wide open spaces of Foster Falls Park. The park is on the trail so stopping there should be part of your journey.

On the trail there is little in the way of refreshments. However, I was able to purchase light snacks and drinks at the restored railway station in Foster Falls Park. The store manager, Marilyn Rudy, told me that the park rents bikes, canoes, kayaks, float tubes, and horses. In addition to the train depot, other historic attractions include an old iron furnace, caboose, and a hotel and grist mill that have not yet been restored. The park also has an outdoor amphitheater that is used during the summer. Two festivals are held annually at Foster Falls. In early September, the park hosts the Railway Festival and on the third Saturday in September it hosts the Wythe County Heritage Day event.

A few miles north of Foster Falls Park is a 200 year old shot tower. According to Wikipedia, “lead was hoisted to the top of the tower using block and tackle and oxen. The lead was melted in a retort and then poured through a sieve at the top of the tower. The droplets of molten lead would become round during the 150-foot descent. The shot would collect in a kettle of water and workers would enter through a 110-foot access tunnel located near the bank of the New River to retrieve the shot from the kettle.” 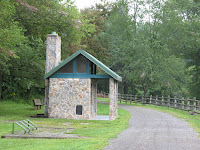 the Cliffview campground and was impressed. The facilities are primitive but well built. In fact the pit toilets here and elsewhere along the trail were in stone buildings and very clean.
The trail is accented with several interesting pieces of trail art. Just outside of Pulaski, I enjoyed the Ghost Train Sculpture by Harry McDaniel. It consists of five abstract sculptures on poles and telescopes placed at each end. Looking through the first telescope I saw the silhouette of a locomotive and from the other telescope I saw the silhouette of a caboose. The other sculpture near Galax was more abstract but I believe that it depicted the wild and scenic New River. 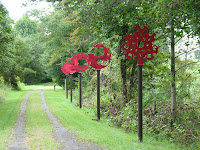 light fixture, and tunnel warning device with tentacles hanging over the trail like a “brushless carwash” that warned trainmen to duck or get off the top of the train.
Before arriving back at Galax, it rained heavily for about 45 minutes. Luckily, I planned for this possibility by carrying appropriate rain gear—3 plastic bags for my wallet, cell phone, and camera. Since it was very warm, I did not carry any other rain gear and enjoyed the cooling effect of the soaking I received. At the Galax trail head, I had to climb the hill back to my friend’s house. After getting cleaned up and enjoying wine on their deck we headed into Galax for dinner.

Galax has a vibrant downtown with art, music, coffee shops, cafés and restaurants, and antiques. It is the home of the Jeff Matthews Museum with Civil War and Native American artifacts, the Old Cranks Motorcar Museum and the Rex Theater. This Theater offers live music which is often free during its Friday night radio broadcasts. In addition, Galax has hosted the Annual Fiddler’s Convention since 1935 and is on Virginia’s “Crooked Road” music heritage trail. (This 300 mile trail through Southwest Virginia is also included in my file of great places that I want to cycle). Finally, the Blue Ridge Music Center is only 12 miles outside of Galax.

After a night on the town, my wife and I packed our car in an early morning rain for our return trip home to Northern Virginia. We hated to leave and seriously talked about looking for a realtor so we could also live in the New River paradise.

Posted by yellowbiketales at 1:53 PM